Part 2-Are you ready to continue our journey as TIA, one of Tucson’s best schools goes to China? On our first day we traveled from San Francisco to Hong Kong. After a good night’s sleep, we explored the city of Hong Kong including a trip up Victoria Peak to view the city in all its splendor. We also did a little shopping and watched a Chinese movie being made right in the streets of Hong Kong.

Chengdu: The Gem of Southwest China

The morning of our 3rd day of travel had us back at the Hong Kong International Airport and off to Chengdu. Upon exiting the Chengdu International Airport, the first two things we noticed were the remarkable cooler and more comfortable weather and the traffic! Bicycles, pedestrians, taxis, busses, cars, and motorcycles all share the road in a kind of chaotic frenzy. It’s amazing and a little scary to witness! Due to the delay of the flight (raining in Hong Kong), Mr. Wu and the local tour guide had to re-schedule the planned activity (Leshan Giant Buddha) for the next day for everyone’s safety. Instead, the group went to a silk factory in Chengdu and the workers showcased our group how they transform the silk produced by the silk-worms into a variety of wearable and home décor products. Later, the group had dinner and checked into a hotel in Chengdu for rest. 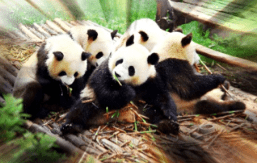 When our group woke up on the 4th day, they were greeted with a pleasant sunny day and a well-cooked breakfast. Our first stop was the Chengdu Research Base of Giant Panda Breeding. The base began in 1987 with six giant pandas rescued from the wild. By 2010 the panda population in the base had increased to 97 from those original six. As the giant pandas are studied and cared for, we were amazed at how close and unimpeded we were able to view the uncaged giant pandas and red pandas on the base. The Chinese people love their pandas, and so did our group!

After spending almost two hours at the base, our group traveled another two hours to the city of Leshan and enjoyed a peaceful Chinese lunch at a local restaurant. After lunch, we took a cruise boat to view the Leshan Giant Buddha. Carved by hand during the Tang Dynasty (618 – 907), the Chinese people used 90 years to complete the construction of this statue with a height of 71 meters and width of 28 meters. Sitting on the Minjiang River and facing Mountain Emei, Leshan Giant Buddha is the largest stone Buddha in the world and has been listed as a UNESCO World Heritage Site since 1996. After the visit, our group traveled back to the Chengdu International Airport and took an evening flight to our next stop. 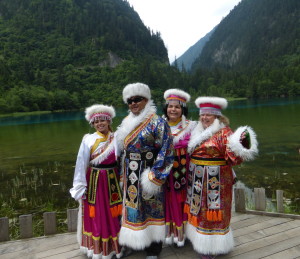 It was a very short flight from Chengdu to Jiuzhaigou Valley (about 45 minutes). Before landing, our group could see the mountain range and glaciers surrounding the small regional Jiuhuang Airport. Upon landing, our group felt the drastic change of climate, cold and rainy! After being picked up by the local tour guide (a Tibetan who has a beautiful voice and studied English all by himself), our group went to dinner and checked into a hotel for rest.

Waking up to the fresh cool air in the Valley, our group started the 5th day anew. Jiuzhaigou Valley, literally translated as Valley of Nine Villages, sits on the edge of the Tibetan Plateau and stretches over 180,000 acres. With an elevation ranging from 6,600 to 14,800 feet, the valley is a visual feast of colorful lakes, multi-level waterfalls, majestic mountains, and imposing glaciers. After the frenetic energy of two large Chinese cities, the breath-taking natural beauty of this valley was rejuvenating.

This part of the trip may be what many of our group will remember as the highlight since the valley is off the beaten path for most Americans visiting China. It was so odd for the Asian tourists to see that many Americans in the valley at once that they were taking pictures of us taking pictures of ourselves! Those pictures were even more memorable because many in our group posed wearing traditional Tibetan costumes! After the full and abundantly rich visual feast of the valley, we headed back to the Jiuhuang Airport to take an evening flight. As our group’s bus approached the airport (30 minutes away) it suddenly broke down and we were stuck in the mountains of Sichuan Province. Luckily, the tour guide contacted his friends and was able to have another bus driven to our “breakdown” spot to pick up our group in about 40 minutes. In the meanwhile, members of our group played “hitch-hikers” along the Freeway and made a happy memory out of this experience!

Xi’an: A Journey Back to the Qin Dynasty

By the time the flight took off from Jiuhuang Airport, everyone in our group was physically exhausted from the intense hiking inside the valley. Upon landing in Xi’an, our group checked into a hotel and slept in for the rest of the night.

When everyone in our group had an awesome breakfast and felt refreshed, we were ready for the 6th day of our tour. In Xi’an we experienced one of the most fascinating and historically significant exhibits of our travels: The Terracotta Army. The huge army of life-sized terracotta statues was made to be buried with Emperor Qin Shihuang near his tomb. These terracotta warriors and horses were not only a show of his glory, but also a remembrance of his army that triumphed over the other warring states in China which resulted in unification of China more than 2,000 years ago. Furthermore, the emperor believed that objects like statues could be animated in the afterlife and could therefore protect him after death. These serious-face warriors were discovered in 1974 by a local farmer digging a well. Amazingly many in our group got a chance to take a picture with the farmer while visiting the mausoleum.

After a fabulous lunch (consisting of various types of Chinese noodles), our group stopped by a local folk house to watch the Shadow Play, an ancient form of storytelling and entertainment which combines the movement of cut-out figures held between a source of light and a translucent screen and dramatic voices/singing. After the show, we roamed around the Muslim District of Xi’an and experienced the diversity of the Chinese population and culture. Then the tour guide took our group to have a “Hot Pot” dinner before we boarded the overnight train from Xi’an to the capital of China.

Beijing: The Heart of China 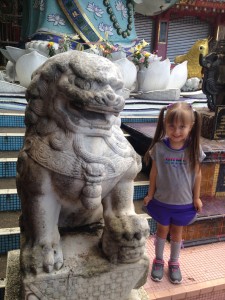 The final leg of our journey began with us boarding a night train from Xi’an to Beijing. Our group, occupying a whole cart (36 passenger capacity per cart), tired but exhilarated by the nonstop pace, kicked back and relaxed on the train. We each had a bed and were able to rest en-route. Once we arrived at the Beijing Train Station at 7:00 am, we were picked up by the tour guide and had McDonald’s for breakfast!

After breakfast, we spent a good hour touring the Temple of Heaven, a complex of religious buildings constructed from 1406 to 1420 and frequented by the Emperors of the Ming and Qing dynasties for annual ceremonies of prayer to Heaven for good harvest. In the meanwhile, our group saw locals practicing Taijiand Chinese calligraphy in the park. Some of us even played shuttlecock with local folks. What added to all the splendor of Beijing was that one of TIA’s former teachers (who now works in Beijing as an English teacher) met us at the temple and joined us for the rest of our tour in Beijing, thrilling the students and teachers on our tour. After lunch, we checked into the hotel for a brief rest before visiting the Tiananmen Square and the Forbidden City. We spent almost three hours walking inside the Forbidden City and explored how Chinese emperors handled state affairs and the lifestyles of their families within the palaces. We concluded our first day in Beijing with a fancy dinner at a local restaurant with the most famous local dish – Peking Roast Duck!

The last day of our tour started with the Ming Tombs, a collection of imperial mausoleums built by the Chinese Ming dynasty emperors. We learned about the Ming emperor Yongle, who relocated the capital city of China from Nanjing to the present location Beijing. He also started the construction of the Forbidden City in 1420. He selected his burial site and created his own mausoleum, followed by subsequent emperors who chose to place their tombs in the same valley. Later on, the tour guide took our group to a jade shop and showcased the variety of jade products before lunch.

The very last stop of our journey was the Great Wall of China. As the bus approached the entrance gate, it started to rain. Everyone in our group rushed into local vendor shops to purchase colorful ponchos in order to complete our excursion. We took a cable cart to reach the mid-section and then climbed to the peak of one of the towers. All of our photos came in a variety of colors with the obscure Great Wall in the background due to the rain. It sure was unforgettable!

We had our last dinner of the tour in a fancy restaurant and our students performed the Chinese song “Beijing Welcomes You” in front of everyone in the restaurant and many of the group gave an emotional speech about their feelings of this wonderful journey. Mr. Wu concluded all the speeches with a “Thank You” note to everyone for being patient and understanding and a “Work Hard” note to all the students on this tour, urging them to remain diligent in their studies/career so that they can all have a quality life. Our group went back to the hotel to pack and rest after dinner. The next morning, Mr. Wu saw many of the group off at the Beijing International Airport and flew back to his coastal hometown Dalian for his summer vacation!

Want your child to experience a school like no other? Click here to enroll online at TIA!