TIA has a Star Party every other year. This event was held in October of 2019 and it was the fifth Star party that TIA has had. This Star Party was held at one campus therefore students from the other three campuses brought their projects to share with everyone at the East campus.

Every two years the high school studies earth science so the whole K-12 school will do a unit study related to the universe and solar system. As a result, this allows each teacher to teach something age-appropriate in earth science. The students create presentations for their particular subject matter. Then they bring them to one campus to showcase them to everyone else. The reason TIA has the Star Party is it’s a great opportunity for the kids to display their work for the parents. Everyone learns new things by interacting with all the different projects. It also provides a good reason to get the parents, students, and TIA staff together in a fun friendly, learning atmosphere.

In addition to the student projects, the Tucson Amature Astronomy Association was invited. The TAAA set up some of their high powered expensive telescopes so that everyone could observe Jupiter, stars, other planets, and satellites as they pass by.

TIA loves having people that are knowledgeable visit the school to share their expertise with the kids. Hence this provides a way that TIA can get the community involved to help broaden the outlook of the students.

This year’s Star Party at TIA was held on Jan 16th, 2018 at West campus with an attendance of about 350 people.

What is the Star Party about?

Every two years when the high school is studying earth science, the whole K-12 school will do a unit study on anything related to the universe, galaxy and solar system. This allows for each teacher to teach something age appropriate in earth science. The students create presentations for their particular subject matter and bring them to one spot (West Campus) to share with all the parents and other students from all campuses. It’s called the Star Party.

TIA is such a small school that they cannot offer the opportunity for students to choose what classes they want to take when they’re in high school so in order to meet the state standards and the college standards in regard to required science classes, those classes are on a 4 year rotation plan. One year they have earth science for 9th and 10th grade and the next year it is biology.

School Themes at the Star Party 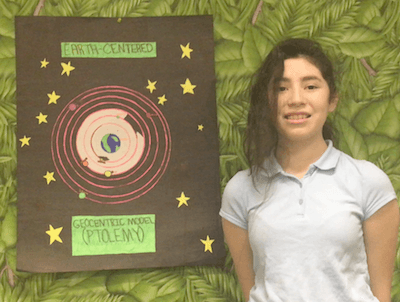 Each school campus has a theme for the Star Party, and was assigned one room at West Campus to set up all their students’ projects. Everyone at the Star Party could explore the different rooms, enjoying the projects and learning about the various subjects.

Midvale Campus theme was the galaxy. They had projects about black holes, explanations of the Big Bang Theory, and much more. It was about things that could happen in the big picture in comparison with the Solar System. One student brought a PS4 game that has a simulations of the Mars Rover and kids had the opportunity to see what it would be like to drive on Mars.

Broadway Campus theme was technology and research throughout the years for Space Exploration. A maze in the room took guests past all the different projects the students had made. They started with the older civilizations such as the Mayans, Egyptians, Greeks, and Romans explaining how they studied the skies, how they implemented different things and what they knew about the equinoxes. Then they moved on to the Middle Ages where students presented, from the points of view of scientists of that era, theories about how the universe was created and how the universe looked.  From there, the next station was early exploration from the 1920s to the 1970s, and the race for lunar exploration, the Moon landing, and satellites sent into space. Next was current technology like the Mars Rover and Voyagers, and how they are taking pictures in space and sending them back to earth. Last was future technology, coming up with ideas of what future space technology may look like by comparing Star Wars and Star Trek. 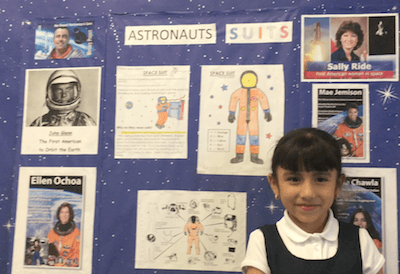 West Campus theme was the solar system. The students created paper-mâché replicas of the planets. Science projects of the planets were displayed on poster boards and they also had a star projection light display.

East Campus theme was the exploration of space. Many students replicated experiments that had led to the exploration of space, and on the physics behind the technology that allows people to do space-related research. Some of the students were in the room demonstrating their experiments, many of which were hands-on. For example, they had a box with sand and they would simulate what the landing of a meteorite looks like.  They would drop a rock inside the box and you could see the marks it would leave behind. This explains how scientists can tell how large meteorites were that landed on Earth, by looking at patterns of their landings. The older students were working on demonstrating how sound waves can be used to move certain items.

Every year at the Star Party, TIA invites the local Amateur Astronomy Association to come with  their very expensive high powered telescopes which they set up for the kids to view stars, different constellations and planets. The Star Party is held on an evening of the new moon because the sky is darker and everyone has a better chance of seeing things more clearly in space. Unfortunately this year the weather was extremely cloudy and the TAAA canceled since there was no point in bringing out their equipment if nothing could be seen with it. But all was not lost.

Close Up View of U of A With a Telescope

TIA did have access to one telescope which they decided to point at the University of Arizona campus. This turned out to be a good teaching moment for the younger students to understand how a telescope really works as the U of A is something they are familiar with. They know it’s there, far off in the distance. With the telescope pointed at it, they could see the U and A, they could see the light stands pointing at the stadium. Being able to see the U of A was very real and they went away with a better understanding of how a telescope works as a very powerful magnifier.