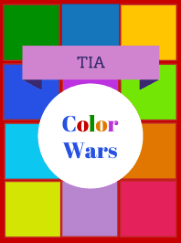 Color Wars originally started at the TIA East Campus several years ago with great success.  This year TIA Broadway and TIA West campuses joined together with the East campus for the Color Wars.

How to Build Team Spirit: The Draft…just like the Pros!

Six seniors and six juniors worked together with Mr. Montemayor to draft all the students into teams. They tried to make sure that the teams were as even as possible. Instead of just picking names at random or by order of the grades to create the groups, they used the attendance list with all the student’s names on it and started working their way through the lists, grade by grade, picking students for each team, all the way from the seniors down to the kindergartners.  Each team captain says, “I want so and so.”

A lot of the seniors and juniors were surprised to find out that they actually knew many of the younger students.  For example, one senior would say, “Who is Johnny?” And the other senior would say, “Johnny is the one that did this and this on that day” or “Johnny is the one that dresses this way” or the one that “has the hair that looks like this.”  Among them all, they pretty much knew everyone. Because the older students really interact with the little ones during the school year at different events (which is something special one doesn’t see in most schools), they really get to know the younger kids. After they picked their teams, each captain picked a teacher and team color. They had a lot of fun doing the draft this year.

Each year during one week in May, the teams of students meet with their captain and teacher each day at a specific time to do a specific challenge. On Monday teams create cheers. The one with the best and loudest cheer gets points. Tuesday is Field Day, so the competition for the Color Wars is based on attendance.  The teams get one point for every student that attends.  Wednesday is a day of races with a ping-pong ball and spoon race, and another race having to do with popping balloons. Thursday is a paper airplane contest to see which airplane flies the longest and also to see which one can fly the farthest. Friday from 12:00 to 3:00 is the grand finale.  There are different games for each grade level so everybody can participate. Events include hula-hoop and  jump rope contests in addition to relay races, basketball shoot-outs, and many other games. This is a great week of fun for everyone!

Join the Fun at TIA!!! One Fine Charter School in Tucson

Tucson International Academy is an independently-run charter school in Tucson, AZ. It is a team-based learning community that prepares students for a global society. Events such as Color Wars help build team spirit and cooperation between the different campuses and students at TIA.